…is the most beautiful and exciting beach I have visited so far!! It was about a thirty minute drive to the absolute most southwestern point of Puerto Rico. As we got close, the road became ridiculously muddy and bumpy and I requested to drive my friend Serafino’s huge truck through. This was not a good idea because I felt very invincible while driving it, and that resulted in most of my friends feeling really carsick …whoops! There is a big, pretty lighthouse there with some history that I have not learned yet, but I will eventually! The views were amazing, and there were iguanas everywhere! They were of all sizes and colors and they would just hangout on the walls of the cliffs and hide in random little holes. At one time I literally saw like 8 it was crazy. This picture looks like I am about to walk right off the edge... 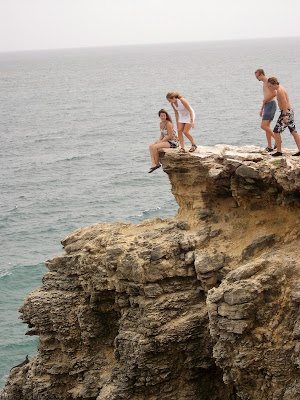 And then this is a picture of Esther with an incredible view! Please pretend that it's me. 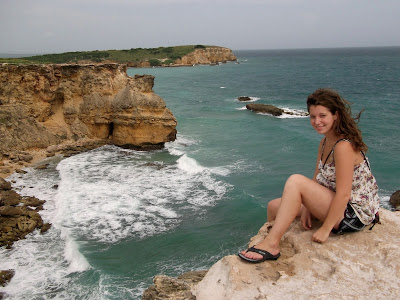 Then we took a little hike to this little “hot tub.” It was nice and relaxing until a wave came... we all ended up in different places after each one! It was a little scary but very fun.
Before wave: 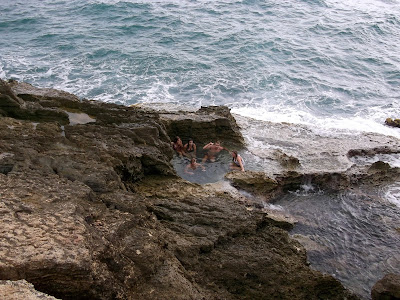 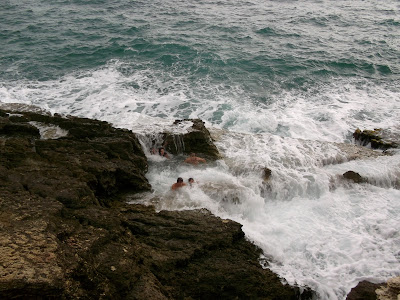 Waterfall!
In the little town of Maricao, the coffee capital of Puerto Rico, there is a fantastic waterfall up in the mountains, and most locals don’t even know that it’s there. We trekked up streams and mountains to get there and jump off. We had a extreme near death experience here though… On one of the cliffs, we were deciding weather or not it would be possible to clear the rocks down below, so I was standing over the edge on this little patch of land, looking down for about a minute. Then I decided it was clear so I went ahead, ran for it, and made it. All good. Then while my friend Serafino was doing the exact same thing, looking over the edge, the little patch of land completely broke off underneath him! He was holding on to like little baby roots, hanging about 30 feet in the air over some rocks! Luckily Garrett was there to grab his hands immediately and pull him back up…but it was pretty terrifying for all of us who watched in horror from the water (and obviously for Serafino.) Now he jokingly blames me for loosening up that patch of land by flinging my entire body weight off of it just seconds before it broke. I decided that our adventures are like the Price is Right…(sort of)… the more dangerous and fun it is the better, just as long as no one goes too far and actually dies. Haha, so this day ranked pretty high! This is me atop the waterfall before all of the drama occurred. 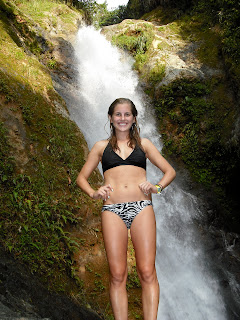