(Puerto Rican 'word' from janguear= to hangout)... Spanglish at its finest. 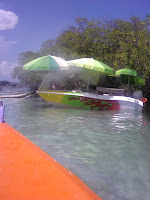 Esther and I were dropped off here for the day while the boys went spear fishing. We bought $2 kids goggles and entertained ourselves for hours looking at fish and swimming 'laps' in the currents. Side note: Esther taught me how to swim butterfly! My swim team coaches gave up after years of failed attempts to teach me, but she did it right away! Better late than ever!

I have mucho más to say, but I'll save it for the next post. My Spanish-American literature readings are guilt tripping me.
Posted by mollee at 10:26 AM No comments: